If you see a word in all caps anywhere in the game, that word is defined in the glossary. If you have questions or would like to suggest edits, please post in this forum thread. 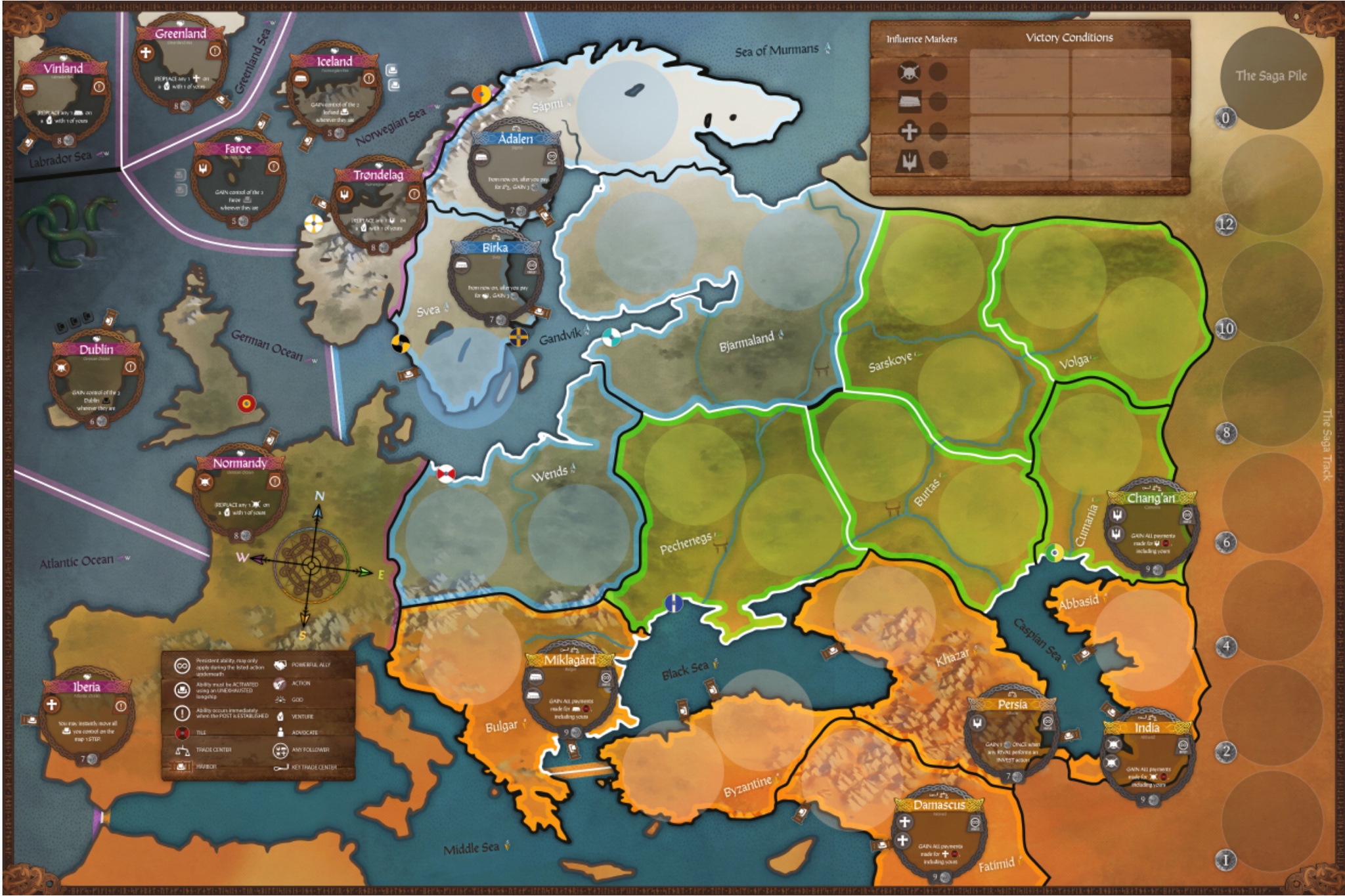 There are four types of tiles. Ventures are played on POSTS. Gods and Advocates are played on the indicated spaces of your Jarlboard. Events immediately RESOLVE when played. 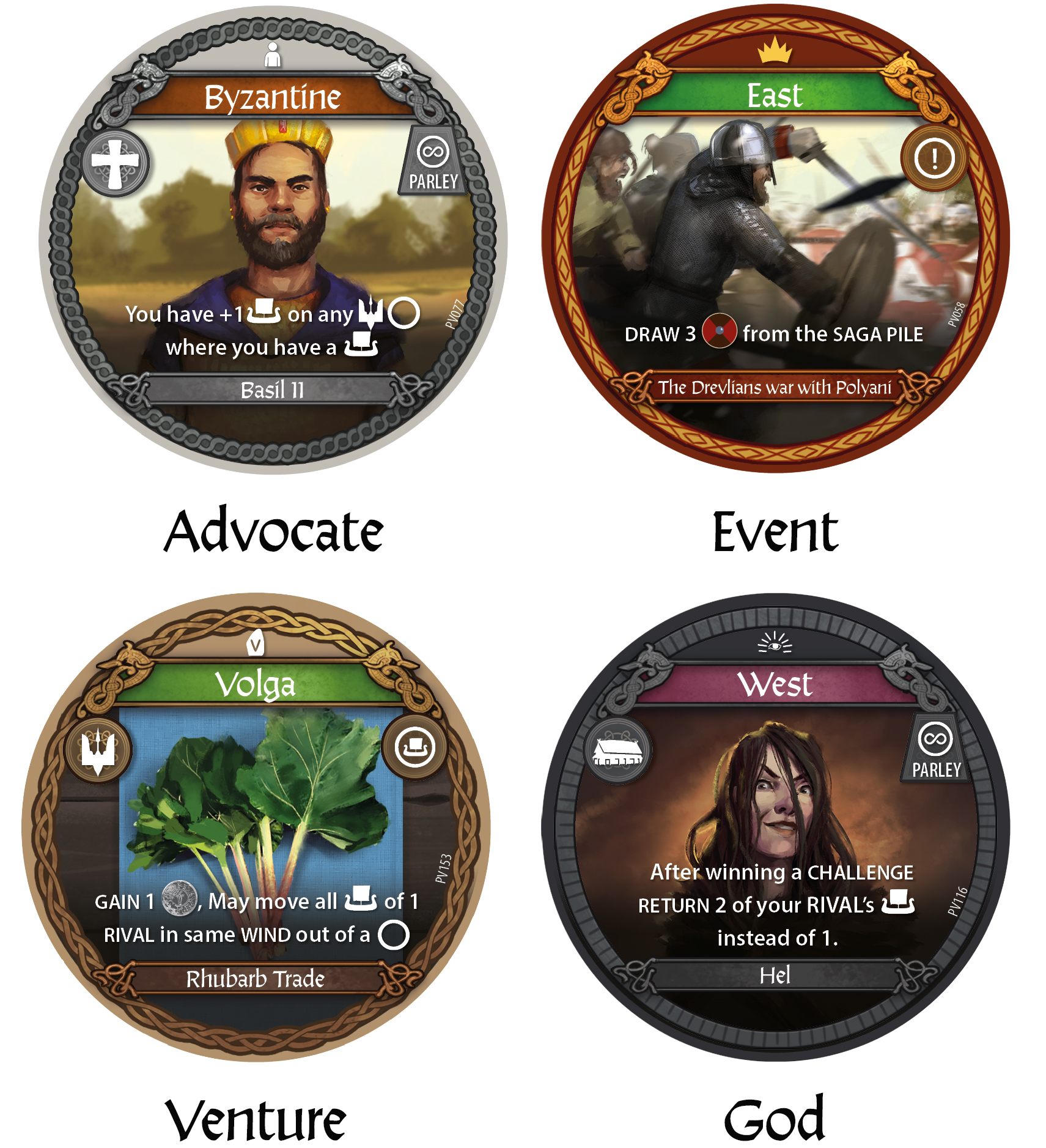 A tile will have its type icon at the very top, its location REQUIREMENT below that, its Follower icon on the top left, its trigger icon on the top right, its ability in the bottom middle, and flavor text below that. The Follower icon determines what type of Follower is placed on that tile. The trigger icon determines when the ability activates. Refer to the icon definitions below for more information. 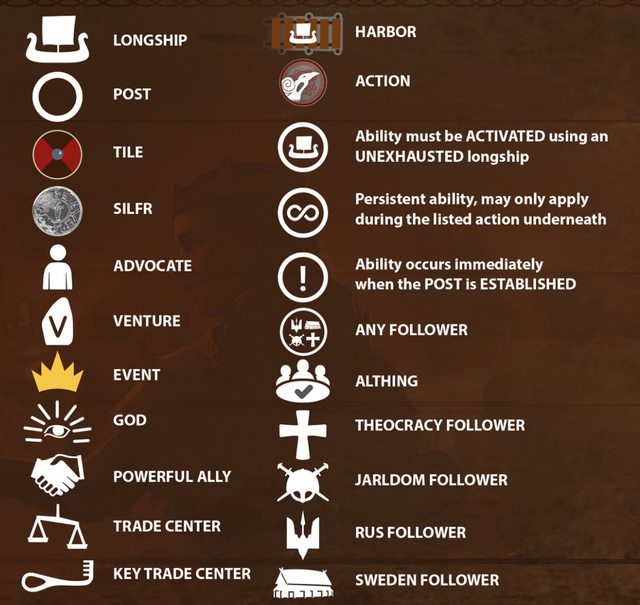 You are trying to achieve one of the revealed Victory Condition cards, which vary in difficulty between Novice, Standard, Advanced, and Eklundian. Novice victory conditions are checked at the end of your turn. Every other victory condition is checked every time an Event is RESOLVED.

A turn consists of the following three phases. 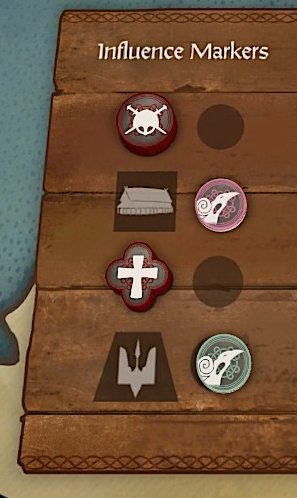 Winter Solstice: GAIN 1 Silfr for every unique Follower type you have currently ESTABLISHED. DISCARD down to your HAND LIMIT. REFRESH.

Turns will continue clockwise from the starting player until someone wins. For a game with more strategy and negotiation consider playing with open hands.

ALL: Every player, including you.

ALTHING: In turn order, vote whether the Event RESOLVES. If 50% or more agree, RESOLVE. Check victory conditions regardless.

AVAILABLE: If the component is in your hand, Jarlboard, the SAGA TRACK, or the discard pile.

BUY: Transfer the listed amount of Silfr to the supply to add the tile in your hand.

CHALLENGE: Choose a RIVAL in the same POST who has fewer Longships. RETURN RIVAL'S first Longship and move every other RIVAL Longship to the nearest REGION. RETURN all Followers acting as Longships.

COLOCATED: Longships that are in the same REGION. A POST is always in a REGION.

COPY: Use a RIVAL's ability.

DISCARD: Move tile(s) to the discard pile face up.

DRAW: Draw a tile from the top of the SAGA PILE and place it in your hand. If you used the INVEST action to DRAW, remove the 1 cost tile from the SAGA TRACK.

DUCHY: A REGION with two Ventures with Followers of the same color. Some abilities may also create a DUCHY. Add a HOME marker to a DUCHY you control.

EAST: Is in the East WIND.

ESTABLISH: (RE)PLACE Follower(s) on the indicated Follower icon(s), pay the cost at the bottom of the POST if necessary. There can never be more than one color Follower on a tile. Abilities are not active until after the Follower is ESTABLISHED.

(UN)EXHAUST: Mark or unmark that a component has been used. It can no longer be used for actions that require EXHAUSTING that component.

GAIN: Without spending an extra action or money, gain this ability or component.

HAND LIMIT: The number of tiles allowed in your hand (the default is 4) at the end of your WINTER SOLSTICE.

HARBOR: Denotes that the POST may only be entered from the Sea REGION the HARBOR is in.

HOME: A starting location, either printed on the map or added with HOME markers. It is not considered a part of any REGION or WIND.

NORTH: Is in the North WIND.

ONCE: Ability applies only once per any player's turn.

(RE)PLACE: Place or replace a component from your hand or Jarlboard on the map. You cannot replace Trade Centers or Powerful Allies.

POST: Any circle on the map. These include empty POSTS, Ventures, TRADE CENTERS, and POWERFUL ALLIES.

POWERFUL ALLY: The brown preprinted POSTS on the map. Their abilities immediately trigger when ESTABLISHED.

REFRESH: Refill empty SAGA TRACK spots. If you're in Winter Solstice, UNEXHAUST all of your components.

REQUIREMENT: Have only your Longship(s) in a POST in the location listed near the top of the tile.

RESOLVE: You must follow the instructions on the Event tile as much as possible, then remove it from the game. Then check to see if anyone has met a victory condition.

RETURN: Return the component to its starting setup position.

SAGA PILE: The stack of unrevealed tiles on the zero cost space.

SAGA TRACK: The selection of tiles in the marked cost spaces.

SOUTH: Is in the South WIND.

STEP: One movement into/out of a POST, or across a white border into/out of a REGION or HOME marker. POSTS without a HARBOR must be entered from a River REGION.

TRADE CENTER: The grey preprinted POSTS on the map. After ESTABLISHING, their abilities trigger during certain actions.

WEST: Is in the West WIND.

WIND: One of the 4 colored areas of the map: North, South, East, West.